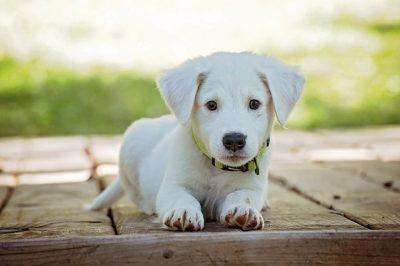 What Length of Time Is a Female Dog Pregnant? Dog Gestation Period

People with a pregnant dog are often unsure of what to expect, especially if it is the first time. All dogs are slightly different but here are some interesting facts about the gestation period of dogs.

What Length Of Time Is a Female Dog Pregnant?

To answer what length of time a dog is pregnant, it is important for the owner to establish the dog’s reproductive cycle. The average female dog goes into heat every 180 days (6 months), although this does vary.

Proestrus starts with inflammation of the vulva and there will also be a discharge of blood. This lasts for approximately 9 days but may vary by a day or two. During this stage, the dog starts getting attention from male dogs who have picked up on the scent, but the female will reject all advances at this point as she is not ready for breeding.

Estrus is when the female is ready to accept the male dog’s advances. The length of this stage also varies, it could be between 3 or 4 days or up to a week to 11 days. The discharge decreases and becomes lighter in color, almost pink.

The final “on-heat” stage, Diestrus, usually occurs around the second week, this sees the discharge become redder and start to taper off. The female’s vulva will return to normal and she will start rejecting the males attempts to mate. After all signs have disappeared the “on-Heat” cycle is complete. Diestrus lasts between 60 and 90 days if no pregnancy has occurred unless the female has given birth to a litter of pups.

Anestrus is the time between heat cycles and generally lasts around 180 days (6 months).

Many breeders of dogs monitor these stages very closely and will consult with a veterinarian during the cycles to ensure the perfect time frame to start the mating procedure.

Methods Vets Use to Determine if a Dog is Pregnant

The gestation time span for the dog is in most cases sixty-three days from conception, as the male sperm can live inside the female for several days after mating with the female eggs remaining fertile for up to two days after.

It can be tricky determining just how long it will be as the mating procedure does not signal the start of gestation. If a dog has been successfully impregnated the embryos move to the uterus and embed themselves in the lining of the uterus, this is usually by day 16 of the pregnancy. By day 22 the fetus begins to form.

Within the first month of pregnancy, there are some signs to look out for, these being:

In the second month of pregnancy, the fetal growth is fast, eyelids and toes start to form and we start to see the claws and skeleton-forming between the 40th and 45th day. At this stage, pregnancy signs include:

By the third month, the female is getting ready to give birth, the puppy’s development in the womb is complete and the pups begin moving into position ready for birth. The female will start looking for a suitable place to nest for the birth. Signs to look out for at this critical stage are:

With the Gestation Period Over, it’s Time for Labor

Upon completion of gestation, labor arrives in three stages:

The first stage is not very noticeable, but contractions start in the muscular wall of the uterus, this will increase in both strength and frequency during stage one. Signs to look out for are reclusive behavior, vomiting, panting, refusing to eat, and a clear vaginal discharge.

Stage two signals the delivery of the puppies, the delivery period can be anywhere from one to 24 hours. The female will give birth to one pup at a time and under normal circumstances will take between 30 minutes to an hour.

If you have prior knowledge of how many pups are due, this will help you to know when the delivery period is finished or if the dog is having any difficulty, and if so you can call the veterinarian for assistance.

The female will sever the pup’s umbilical cords and lick the puppies to clear the membranes from their bodies and encourage breathing.

Once this exhausting time is over for both the new mom and the owners, you can celebrate the birth of these little bundles of joy together!

You May Also Enjoy…