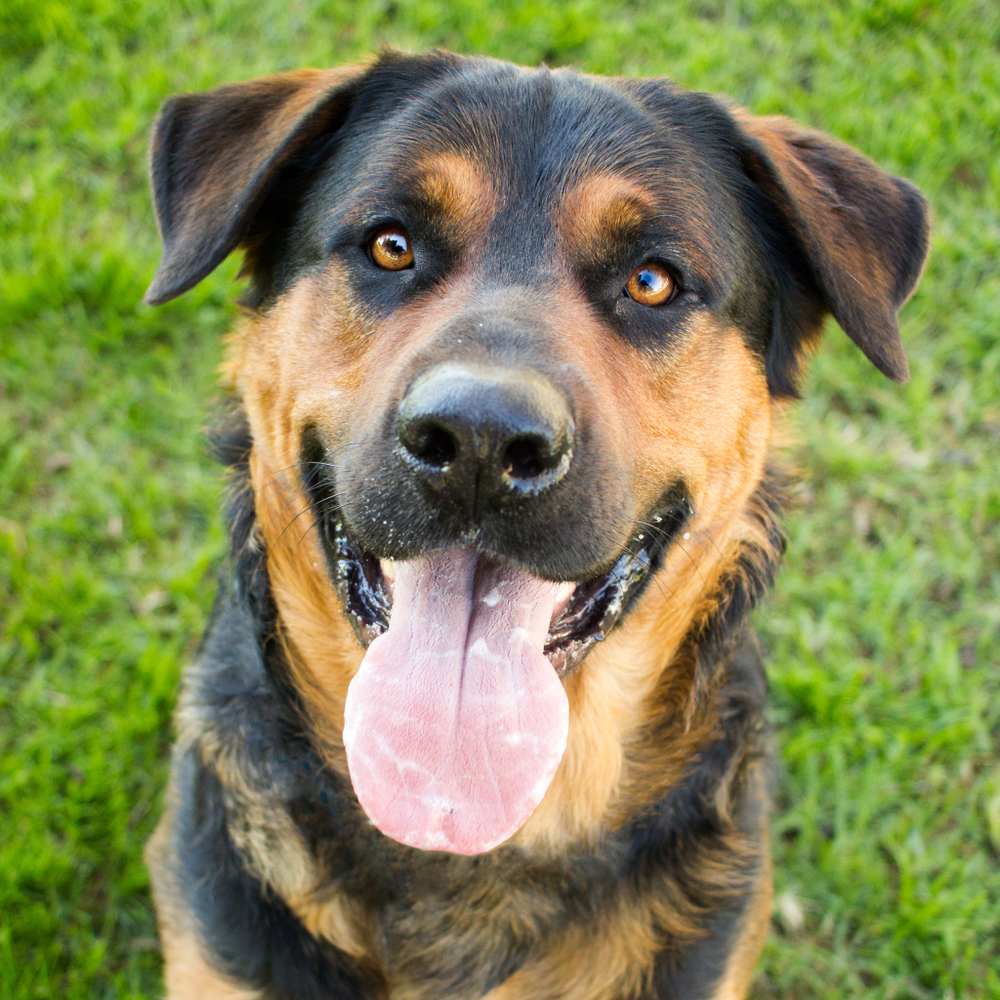 Are you looking for a unique dog to join your family that’s intelligent, powerful, and protective? The German Shepherd Rottweiler mix might be just the dog for you.

The German Shepherd Rottweiler mix is also known as a Rottweiler Shepherd, Shepweiler, Rottie Shepherd, Rotten Shepherd, or Schottie. It’s a mix of two smart dog breeds that were bred to work all day long. As a result, it’s smart, loyal, and needs a lot of exercise.

Let’s learn more about this energetic dog so you can decide if it’s the right breed to join your family.

A Word About Hybrid Dog Breeds

You might think that hybrid dogs like the German Shepherd Rottweiler mix are a perfect blend of the parent breeds. The truth is that they might get more traits from one parent or the other.

That makes it impossible to know exactly which traits a hybrid dog will have. Still, we can learn a lot about what to expect from the parent breeds.

German Shepherds and Rottweilers have a lot in common. That means we can get a pretty good idea about what physical and personality traits a mix might have. 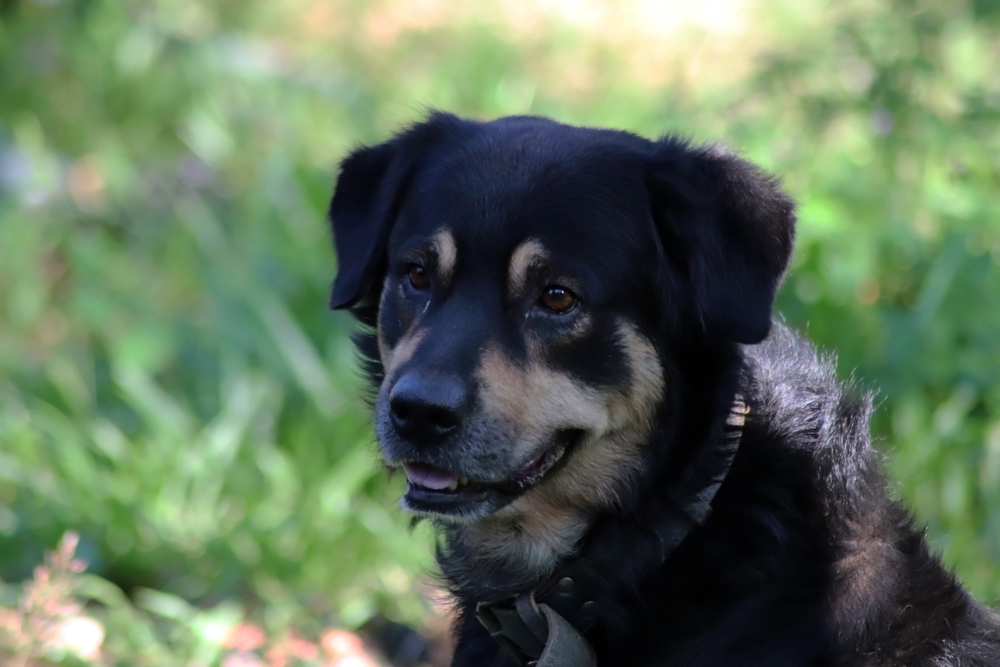 About the German Shepherd Rottweiler Mix

German Shepherds and Rottweilers are both hardworking, loyal, and intelligent dog breeds. The two dog breeds do have some differences, though.

The German Shepherd is the second-most-popular dog breed in the United States. They make loyal family dogs who will do anything you ask. They need a lot of exercise, but they’re easy to train. 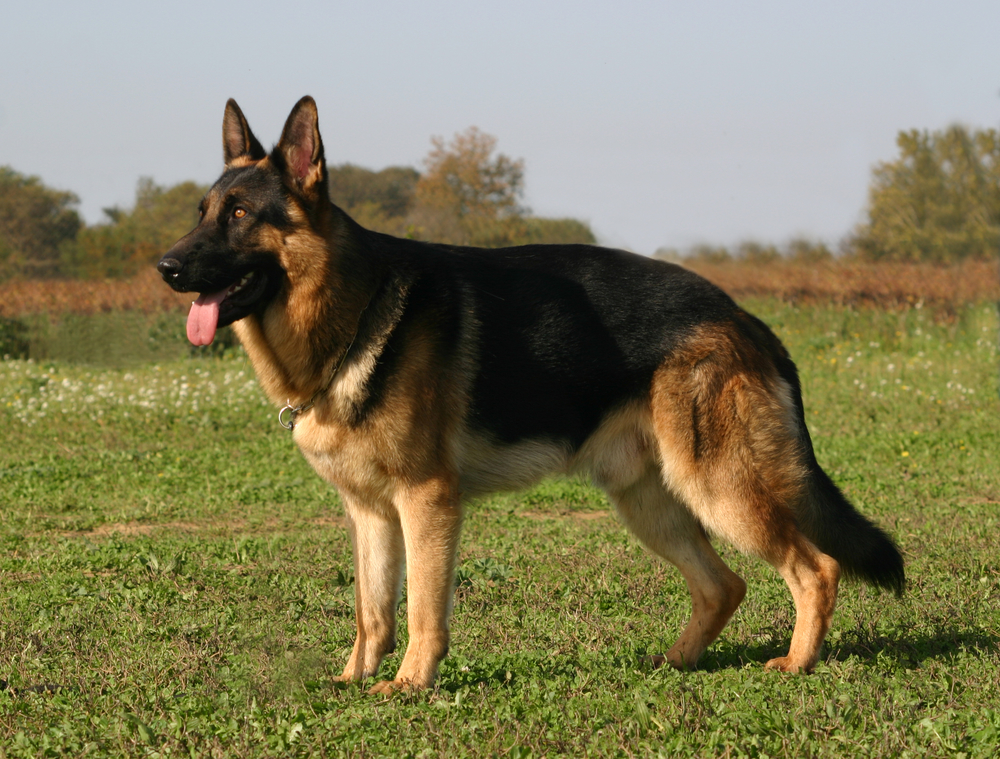 The German Shepherd has an easy to recognize profile with erect ears, a pointy snout, and a fluffy, straight tail. They usually have short, thick fur with an undercoat that sheds seasonally. However, there are also long-haired German Shepherds.

While the most common color of a German Shepherd is black and tan, they also come in these colors:

The German Shepherd was created by German cavalry officer Captain Max von Stephanitz in the late 19th century. He wanted to take the best of all the various local sheepdogs to create superior sheepdog.

As technology reduced the need for sheepdogs, von Stephanitz convinced the military to start using his dogs. The breed was refined during the early part of the 20th century. During World War I, German Shepherds worked as Red Cross dogs, guards, rescuers, messengers, sentries, and supply carriers.

At the end of WWI, an American soldier brought home a German Shepherd puppy who would become Rin Tin Tin. Rin Tin Tin became a famous movie star and popularized the breed in the United States.

The Rottweiler is the 8th-most-popular dog breed in the United States. They’ve had a variety of purposes over the years, but their favorite job is as an oversized lap dog. 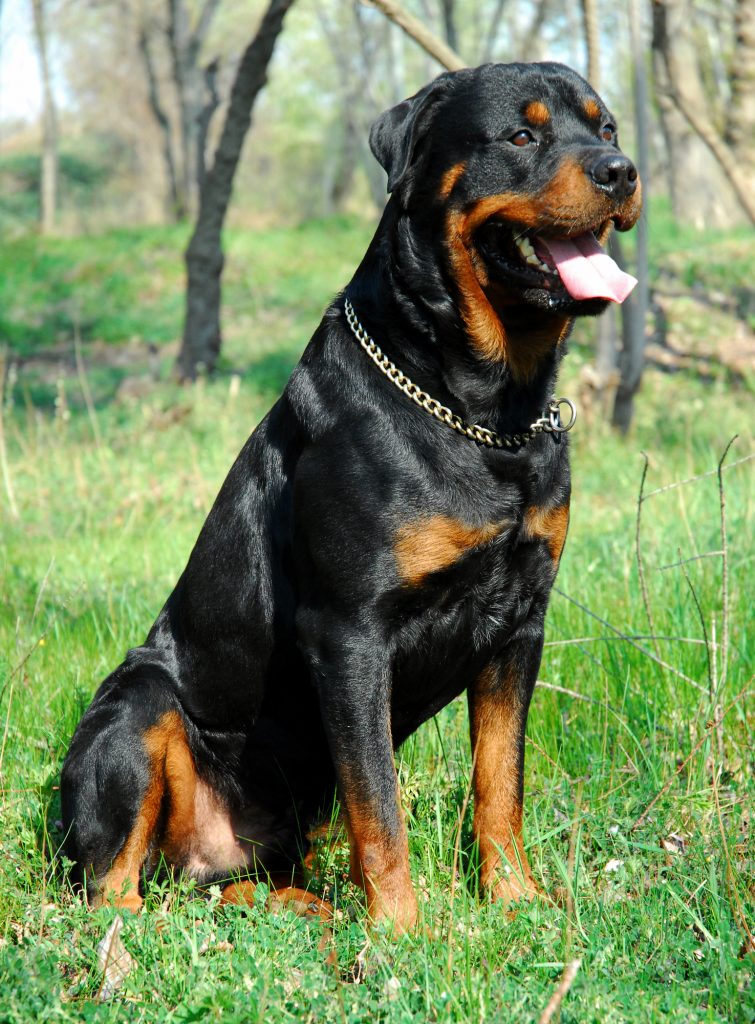 The Rottweiler is a stocky, sturdy dog. It stands 22-27” tall and can weigh up to 135 pounds. Their short fur is always black with markings that are mahogany, rust, or tan.

The ancestors of the Rottweiler were used to guard livestock as the Romans conquered the world. The German town of Rottweil took these dogs and refined them to herd cattle and pull carts to the market. Along the way, they protected their cattle and people and became known as the Butcher’s Dog of Rottweil.

When cattle cars reduced the need for livestock droving, Rottweilers became personal protectors, police dogs, and all-around workers. Now, they’re used in roles like search and rescue and guide dogs for the blind. 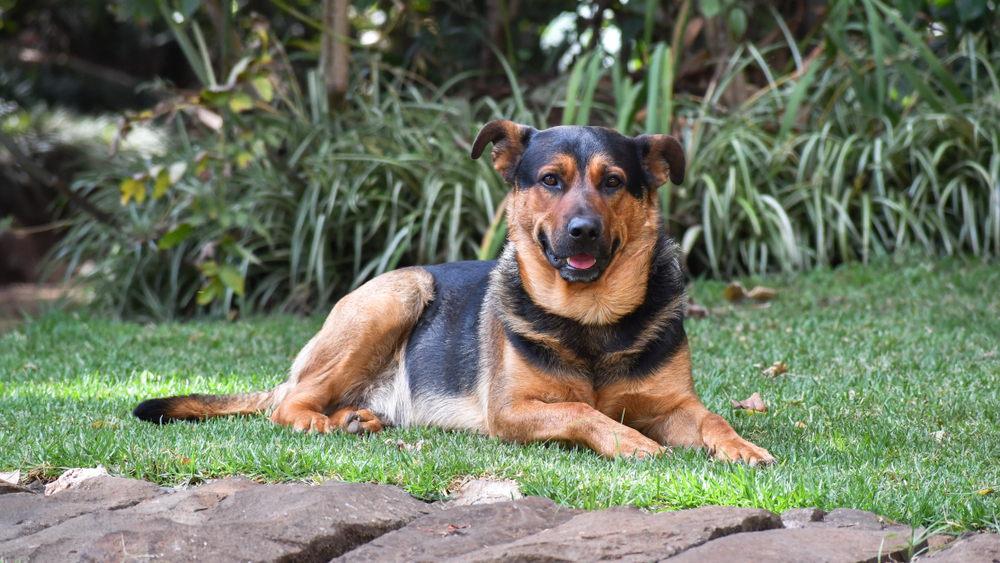 German Shepherds and Rottweilers are both working dogs and are loyal and intelligent. Both breeds can be wary of strangers and make good guard dogs. However, they need lots of socialization to prevent unwarranted aggression.

Rottweilers are prone to obesity, and German Shepherds can be, too. That’s why it’s crucial to feed your Shepherd Rottweiler mix an appropriate amount of quality food. Avoid food with fillers, by-products, or artificial flavors, colors, or preservatives.

You can learn more about the best foods for German Shepherds here. 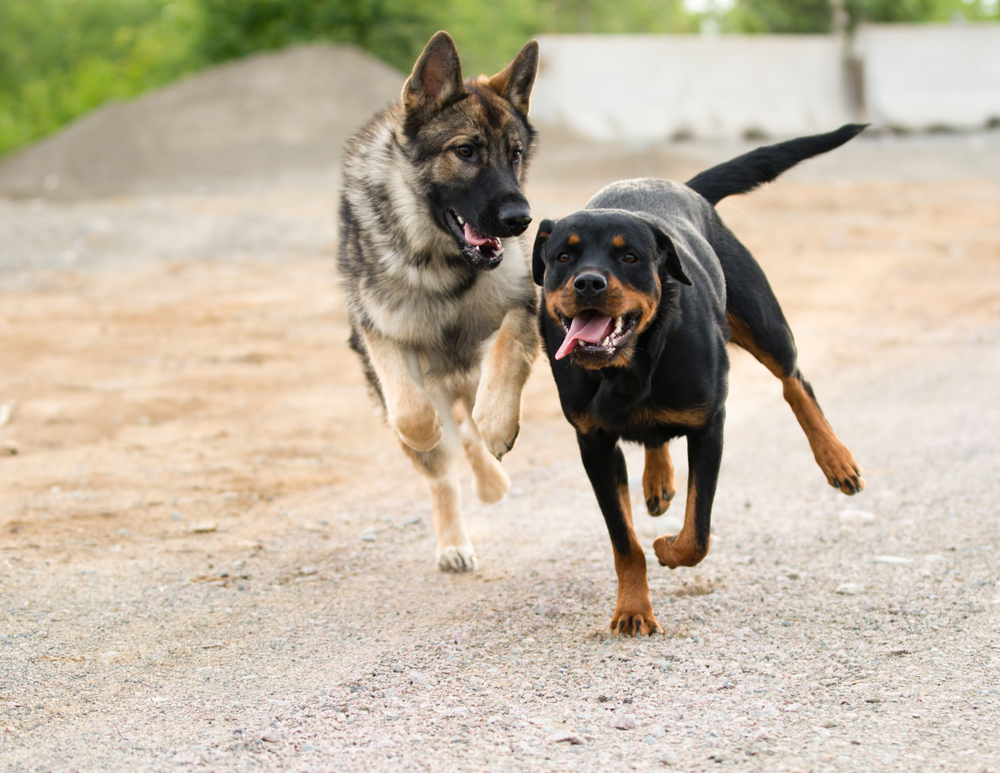 German Shepherds and Rottweilers are intelligent and easy to train. It’s important to use positive reinforcement training, however. Using force or dominance training can lead to aggression.

Both German Shepherds and Rottweilers are prone to a variety of health problems. In fact, the average lifespan for either breed doesn’t extend past the age of 10.

Rottweilers are highly prone to cancer, especially bone cancer. Luckily, bone cancer is more treatable than some types of cancer, with leg amputation chemotherapy buying up to two years. Other health conditions that Rottweilers are prone to include: 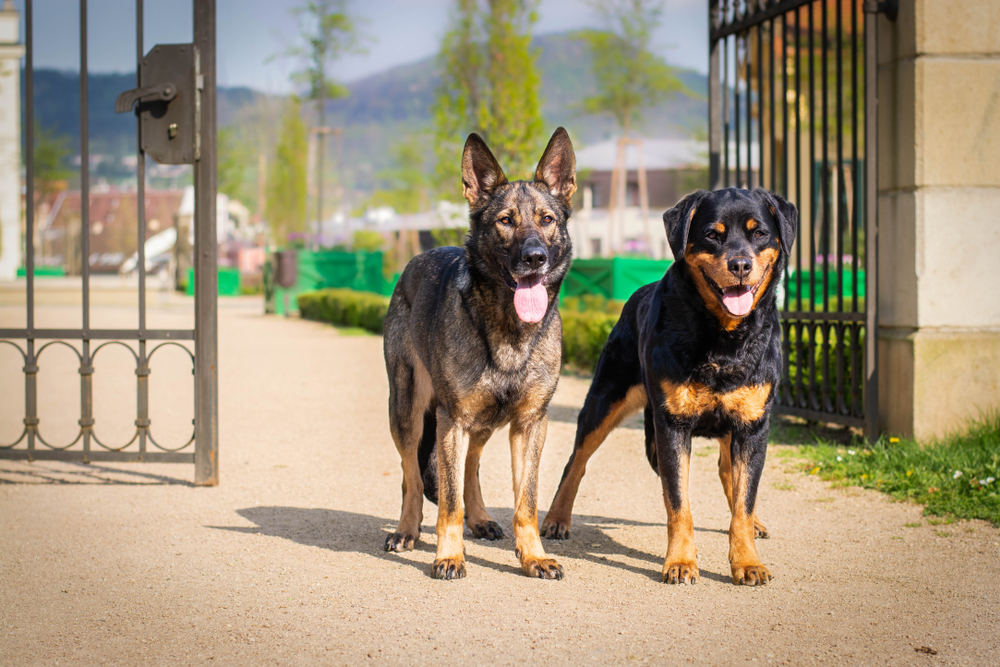 Rottweiler German Shepherd mixes are often the result of accidental breeding. That means you are likely to find one in a shelter or at a rescue. Rescue dogs can make wonderful additions to your family, especially if they have passed temperament testing.

There is no rescue group for German Shepherd Rottweiler mixes, so you should check out breed rescues like these: 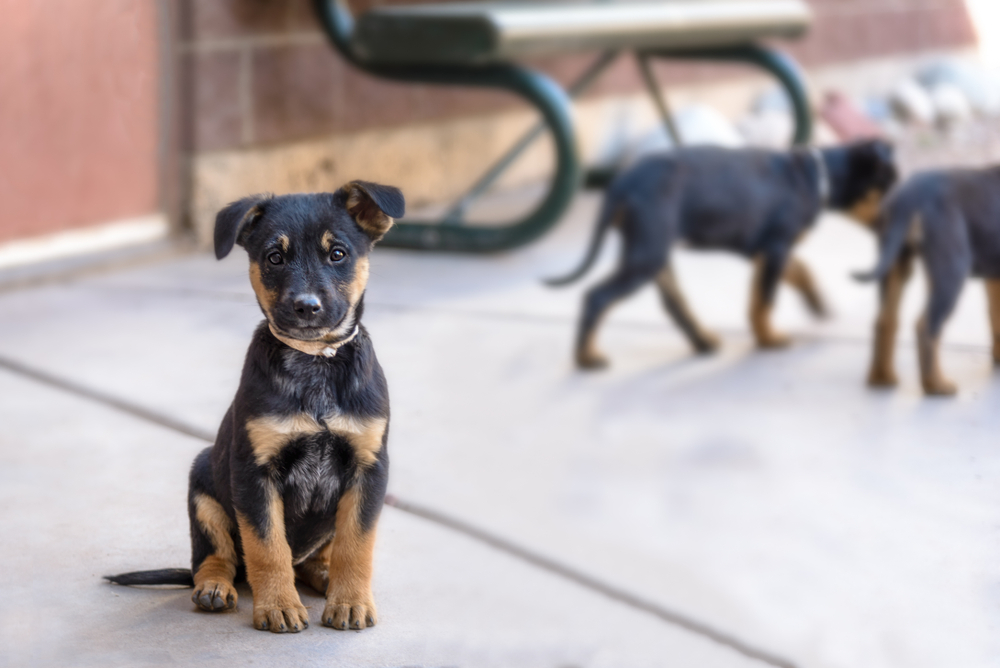 No matter how much you want one of these dogs, you should avoid buying a puppy from a pet store. That’s because most pet stores get their puppies from puppy mills.

Puppy mills mass-produce puppies without any care for the welfare of the dogs. The breeding dogs and young puppies live in terrible conditions. They are often covered in their own filth and never see grass or the sun.

Dogs that come from puppy mills are more likely to have genetic health problems. That’s because puppy mills don’t do any genetic testing. They are only concerned with money, not the overall health of the breed.

Due to the unsanitary conditions, puppies from puppy mills tend to be sick when they reach a pet store. That cute puppy in the window may die from parvo within a few days of joining your family.

If you’re looking for a puppy, make sure you look for a breeder who does health testing on breeding dogs. They are more likely to have healthy puppies.

One final thought: When you buy a puppy from a puppy mill, you may think you’re saving that puppy. The truth is that you are sentencing that puppy’s parents and siblings to a life of hell.

Pros and Cons of Getting a Rottweiler Shepherd Mix

The Shepherd Rottweiler mix is a great dog, but it isn’t right for everybody. Here are some of the pros and cons to consider before bringing one home. 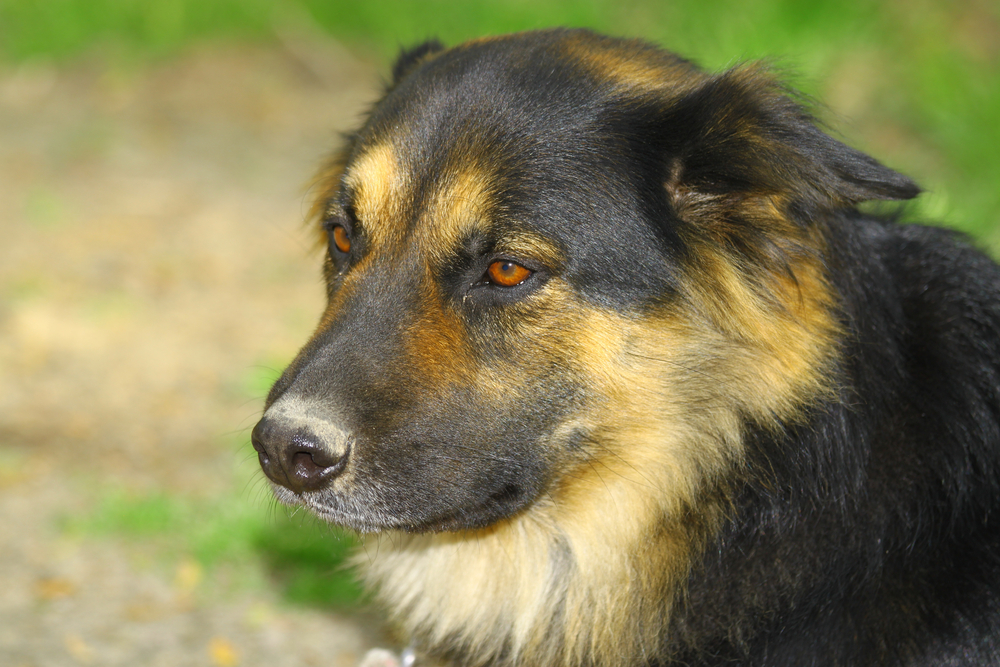 Here are answers to some of the most common questions people ask about the German Shepherd Rottweiler mix.

Yes, German Shepherd Rottweiler mixes are good with kids. However, they need good socialization as a puppy and positive reinforcement training. Their large size and need for plenty of exercise means they can knock over small kids.

Do German Shepherd Rottweiler Mixes Need a Lot of Exercise?

How Big Does a German Shepherd Rottweiler Mix Get?

Neither German Shepherds nor Rottweilers tend to bark much. One exception is that their guarding instincts may cause them to bark at strangers. A German Shepherd Rottweiler may also develop separation anxiety that could cause it to bark.

Is the German Shepherd Rottweiler Mix a Good Family Pet?

Are Rottweilers Good With Kids? The Answer May Surprise You

Do German Shepherds Shed? How Much?

When Does a German Shepherd Stop Growing?

Rottweiler Pitbull Mix: An Essential Guide to the Pitweiler