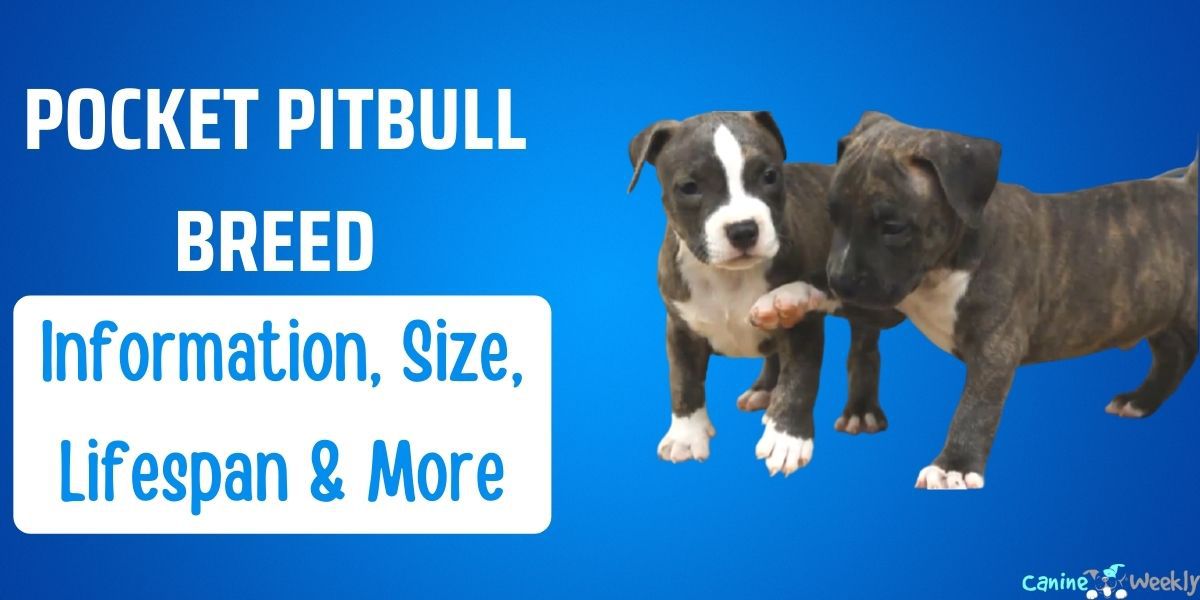 Everyone knows the American Pitbull. This lively and energetic breed has become one of the nation’s favorites. Fewer people, however, are aware of the smaller version of this famous breed: the Pocket Pitbull. While not exactly pocket-size, this adorable breed is becoming increasingly popular across the country.

Crossed with another popular breed, the Patterdale, it’s no surprise this variety of designer dogs is taking up residency in millions of American homes. In many ways, the Pocket Pitbull is America’s best-kept secret, with a small number of people being aware that this breed even exists! Ever seen a Pitbull at the local dog park and thought it looked unusually small? That was likely a Pocket Pitbull, a fun-sized version of the American Pitbull Terrier.

What Is A Pocket Pitbull Dog Breed?

Despite their adorable names, the Pocket Pitbull might not be as small as you think. The pocket Pitbull is a designer dog made up of the American Pitbull Terrier and the Patterdale. Rather than being ‘pocket’ sized, the Pocket Pitbull can be more actually described as a smaller sized version of its Pitbull parent.

Unfortunately, being a designer dog means the pocket Pitbull cost significantly more than both its parents. If you’re interested in owning a Pocket Pitbull, you want to make sure buying this dog is a worthwhile investment for you and your family.

Where Is The  Pocket Pitbull  Dog Breed From?

As mentioned previously, the Pocket Pitbull is a designer dog. The designer dog phenom is relatively new. Typically, two pure-breed dogs with desirable qualities create a ‘designer dog’.  This desirability is what gives designer dogs such a high price tag.

Due to this allusive origin, not much information is available on these hybrid pouches. Although the designer dog phenomenon continues to grow across America, it’s a relatively new breeding method which has only been around for a few decades.

Many assume that the Pocket Pitbull was first intentionally bred sometime in the last twenty years. The exact date and information remain unknown. As is to be expected, dog breeders and owners suspect that the Patterdale-Pitbull cross would have accidentally occurred at some point in history, but an intentional mix of the two breeds would have happened much later.

The parent breeds of the Pocket Pitbull are both hunting and working dogs, meaning although not much is known about the breed, we’re aware they have a rich and interesting ancestry.

Physically, the Pocket Pitbull is almost identical to its Pitbull parent. This is excluding their evident size difference at all.

With regard to appearance, the Pocket Pitbull has the same short stature, muscular frame and short, smooth fur as the Pitbull. As is the case with all crossbreeds, a Pocket Pitbull can end up looking more like either one of its parent breeds.

Pocket Pitbulls have short, smooth and shiny coats. This style of coat requires minimal grooming. To groom your Pocket Pitbull, run a short bristle brush over their coat and keep bathing to a minimum. Although pocket Pitbulls are low maintenance pups, you still need to engage in general hygiene upkeep.

To make sure your dog is as hygienic as possible, remember to brush their teeth with a dog tooth brush, trim their claws with dog nail clippers, and clean their ears every few weeks. Owning a pocket Pitbull might be physically hard work, but small mundane tasks like trips to the groomers are infrequent.

Being bred from two hard-working breeds means the Pocket Pitbull demands high-levels of exercise. Although small, these pups are full of energy!

Now, you might be looking into getting a pocket Pitbull because a full-sized American Pitbull won’t fit in your home. If this is the case, you’re probably wondering, can you own a Pocket Pitbull if you live in a small space like an apartment? The answer to this question is yes. You can own a Pocket Pitbull if you live in an apartment, however, there are still requirements you need to meet. For example, it’s best to still have available space for your dog to run around. If your apartment has a shared outdoor area, this is ideal!

Pocket Pitbulls require a significant amount of daily exercise for a dog of their size. If you own a Pocket Pitbull, you need to be able to provide them with up to one hour of exercise a day. If you’re in an apartment, this means taking them out to a field, dog park, or on a hike. Pocket Pitbulls need mental and physical stimulation and won’t thrive if stuck looking at the same scenery.

Put your pocket Pitbull on a leash (you’ll need a pretty strong one, this breed can pull) and go adventuring! The pocket Pitbull is an idea for solo-adventures or adventure-loving families.

Regarding training, you need to be just as active in their lives as you are with how much exercise they’re getting. Despite having the Patterdales innate playfulness, the pocket Pitbull can take after its Pitbull parent and show signs of frustration. This frustration is usually the cause of a lack of mental and physical stimulation and can result in poor behavior.

As is the case for most dogs, especially Pitbulls, socialization from a young age is imperative. Making sure your dog reacts well to others will shape them in later life and influence your relationship with them.

This breed can be brilliant with children, however, don’t forget, this dog breed is strong and might not be ideal for very young children!

Overall, if you’re considering owning a pocket Pitbull, make sure you’re willing to give them a lot of exercise and put the time in to train them into being your perfect pet!

As is the case with most hybrid breeds, health is always a tricky topic to navigate. On the one hand, generally, cross-breed dogs are at an advantage, being less susceptible to the illnesses their parents often get. On the other hand, the information on their health is often minimal, which can potentially cause concern if your cross-breed does get sick.

Looking at the common illnesses in their parents and analyzing the information on the breed over the last few decades can give us an indication of potential health concerns. Here are a few health concerns to be aware of it you own a Pocket Pitbull:

Being a high-energy, muscular dog breed means that Pocket Pitbull’s require a nutritious high-protein diet. Feel your Pocket Pitbull high-quality premium dry food to fuel them and keep their bodies as healthy as possible.

To avoid your dog becoming irritable, make sure you let them run off their energy and mentally stimulate them with training games and toys.

Learn everything there is to know about the Pitbull in this blog post.

Despite their small size, it’s important you don’t assume your Pocket Pitbull doesn’t require adequate exercise and activity. Owning a Pocket Pitbull demands high levels of activity alongside mental stimulation. You need to be prepared to give your pup lots of attention. If you work a lot or don’t enjoy being active, this breed is not for you.

The time you dedicate to your pocket Pitbull is worth the investment. The more you put in, the more you get out, and giving attention to your pup will result in an affectionate and loving pet with unbounded loyalty towards you. The pocket Pitbull really can be man’s best friend!

If you come from a big family, and you want your pouch to be immersed in family life, perfect! Train your dog from an early age to respect and listen to those in your home. Always wanting to overachieve means the Pocket Pitbull always listens to training and is super obedient when successfully trained.

A Pocket Pitbull is a low maintenance and extremely rewarding breed to own. Whether you’re a family of five or riding solo, owning a Pocket Pitbull will bring an affectionate and loving presence into your home.