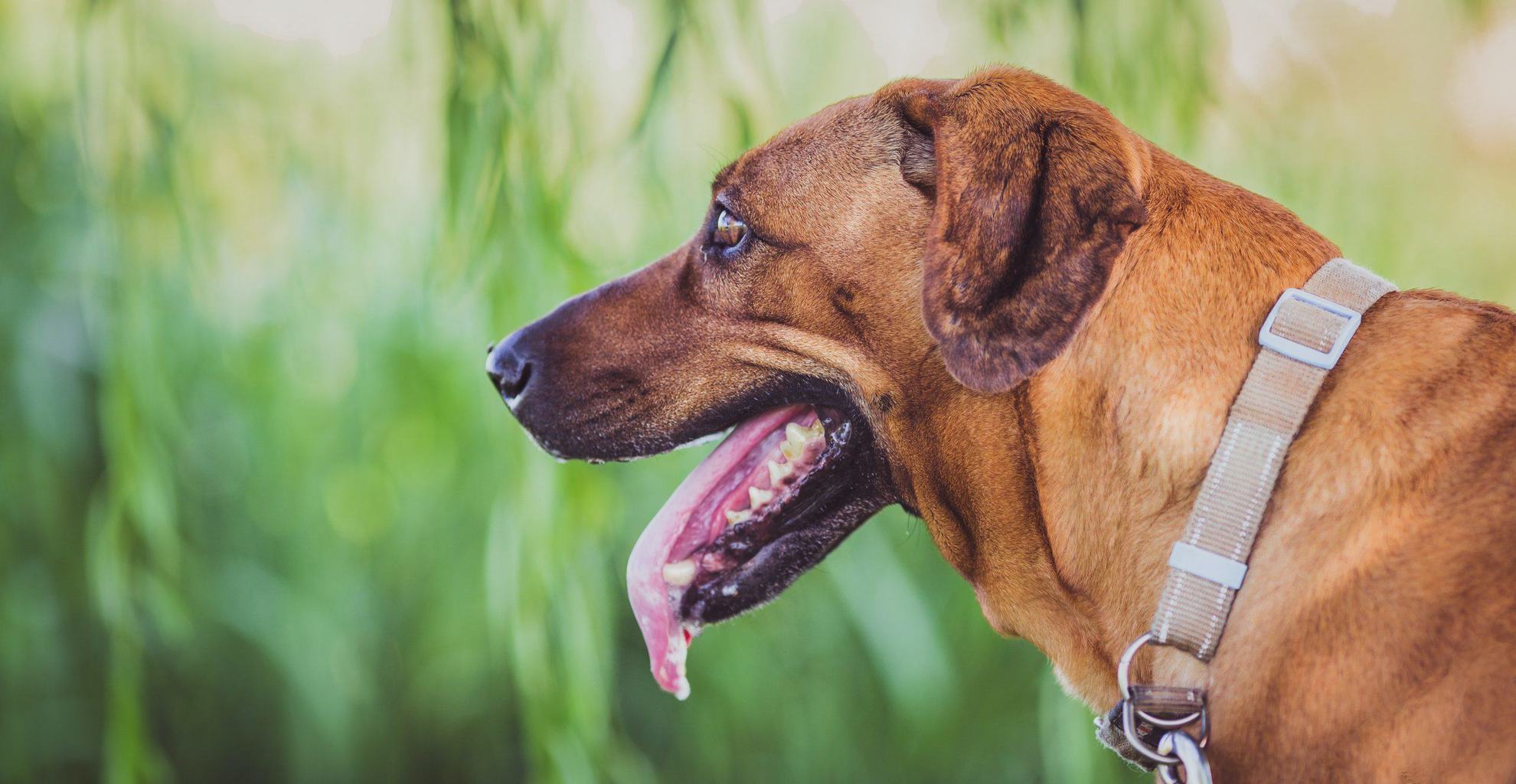 Owning a Rhodesian Ridgeback is, indeed, not an easy task. It requires you to be a dedicated owner who can spare a lot of time for his dog.

In this article, we’ll cover everything you need to know about Rhodesian Ridgebacks. From personality traits and temperament to several ways you can better understand its behavior.

If you own a Rhodesian Ridgeback or considering getting one, you’ve come to the right place.

The Rhodesians Ridgebacks can be easily identified by their appearance due to some distinct features they have, like their floppy ears. The Rhodesian Ridgeback may seem lazy at first glance. However, it’s known for its immense power and unconditional loyalty.

They don’t tend to bark too much as they’re known for their quiet behavior. They also have a low tendency to dig, which is perfect, as it keeps them from getting dirty. Their grooming needs are also low.

Even though they look independent, they actually seek attention all the time. So, giving them time and attention is key.

Their lifespan ranges from 10 to 13 years. They also need regular exercise to maintain their muscular, and athletic body. You should train them for a minimum of 40 minutes a day, which is also great for their health overall.

The Rhodesian Ridgeback is a native of South Africa. It’s also known as The African Lion Hound. This dog is known for hunting and family protection, which is a natural trait that doesn’t need any kind of training.

Back in the 16th century, Boer farmers needed a hunting dog in the wilds of Africa.

A lot of large dog breeds were available at the time. However, farmers chose Rhodesian Ridgeback Dogs almost exclusively, because they were the best option for guarding and winning extremely violent fights.

They were also able to adapt to the weather changes in Africa and handle thirst for up to 24 hours.

Rhodesian Ridgebacks were brought to the United States in the early 50s, and soon enough, they became one of the most popular dogs in the states. They’re mostly known for being fearless, which is probably the main reason for their popularity.

What Is a Ridgeback?

A ridgeback is formed when parts of hair grow in the opposite direction of the rest of the hair. It extends from the shoulders down to the hip.

This dog is naturally muscular, fast, balanced and athletic. Their height ranges from 24 to 27 inches, and they weigh from 70 to 85 pounds.

Their color can be light wheaten or red wheaten with a splash of white on the chest and the toes.

Rhodesian Ridgebacks grow to be hunters and family protectors. They also possess a natural talent for tracking.

This means that your dog will tend to get suspicious around people who don’t necessarily pose a threat, like a mailman. You might need some additional training to teach your dog not to react aggressively.

Rhodesian Ridgebacks are known for their loyalty and protectiveness. They can also develop a great connection with children if they were raised properly.

They’re fun-loving companions, which makes them a superb choice for a family pet! 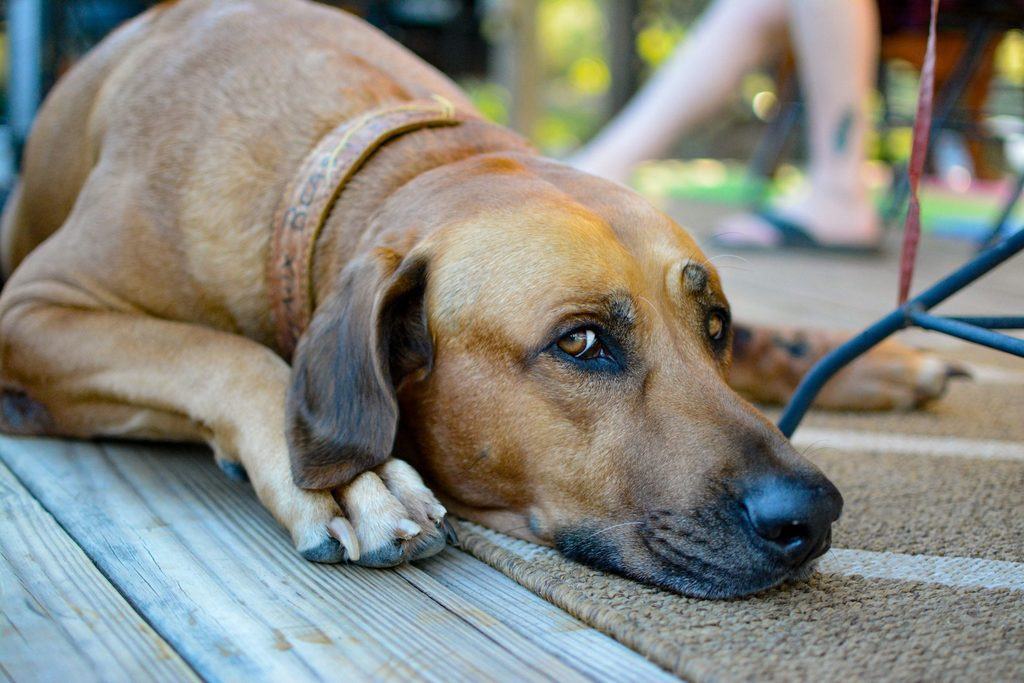 Rhodesian Ridgebacks are known for their hunting and guarding skills, but that doesn’t mean they must be aggressive.

If they start chewing your furniture or clothes, this means you should start training them more often with higher intensity. The main reason for chewing behavior is usually boredom.

Leaving toys or bones for them to chew on when you leave is also a great idea to keep them distracted.

How Does Rhodesian Ridgeback Behave Around Strangers?

Rhodesian Ridgebacks are doubtful dogs. In fact, they don’t trust strangers at all due to their responsibility, which is to guard their owners.

However, it’s essential to allow them to socialize as early as you can, so they don’t act aggressively towards your guests.

Even a well-trained dog can annoy you with some habits. Rhodesian Ridgebacks are usually disciplined, but that doesn’t mean you won’t run into any problems.

Although unlikely for Rhodesian Ridgebacks, they can develop this habit if they’re upset about something that takes place frequently, or due to other habitual problems.

There are many things you can do to stop your dog’s barking.

One of the methods is by simply rewarding your dog with his favorite treat if it’s quiet, and by giving it timeouts if it keeps barking. That way, it would understand that barking is unwanted behavior.

Another simple way to stop your dog’s barking is by giving your dog plenty of high-intensity exercises, which will use up its energy that’s possibly used later in barking.

Limiting its view is also an effective way to stop your dog’s barking. Dogs usually bark in response to something they saw. It’s a good idea to limit the views by using curtains to cover the windows.

However, if this doesn’t work, you should get your dog checked by a veterinarian, as this may be a sign of a medical problem.

Rhodesian Ridgebacks and other hounds are likely to have food guarding issues. These dogs are used to moving in packs and guarding their food against other dogs.

This normal behavior of the dog may expand, resulting in the dog protecting his food from his owners and reacting aggressively if anyone gets near his bowl.

This is a natural behavior in your dog, and you shouldn’t punish it for it. Instead, you must help it understand those good things happen when you get near to its bowl. This can be done by dropping a piece of chicken in your dog’s bowl while it’s eating.

After some time, your dog will be excited if you get close to its food.

What Makes Them Special

Rhodesian Ridgebacks are one of the best companions you’ll ever find. They also enjoy being around other dogs. They’re great watchdogs and can protect your family, especially your child.

As we mentioned before, Ridgebacks have a low tendency of barking, so you should understand that their barking usually means something unusual has occurred. In a nutshell, here are the features that make a Rhodesian Ridgebacks stand out.

Due to their natural abilities, Rhodesian Ridgebacks shouldn’t be trained in hunting and protection.

Instead, You should focus on drills that boost your control over your dog, which will turn him into your perfect companion. This will make it easier for you to raise your dog properly.

Because Rhodesian Ridgebacks are large and very active, they need a specific diet to reflect this massive energy consumption.

Gilpa Kennel is a favorite for a lot of owners, and your dog will thank you for it. It also comes with green-lipped mussel extract and herbs, which are great for the joints.

Like we’ve mentioned before, Rhodesian Ridgebacks are conveniently low-maintenance.

If you have a sensitive nose, you’ll be happy to learn that odor problems will be the least of your concerns.

So, how do you groom your dog? Grab a rubber curry brush and give your dog a good going over his body. Make sure you remove all the loose or dead hair.

When you’re done, grab a damp cloth and wipe him down.

Voila! As clean as a whistle. We don’t think you’ll find another dog breed with less grooming requirements than the Ridgeback.

Rhodesian Ridgebacks are liable to experience some genetic health problems. You should check the dog you’re planning to purchase for any possible diseases.

We’ve picked some of the most common health problems Rhodesian Ridgebacks run into.

This is a genetic medical problem that occurs mostly in Rhodesian Ridgebacks. They’re usually found at the back, especially at the bottom.

More than one dermoid sinus can develop in the same dog. They’re born with it,t and it never develops later on.

The easiest way to reduce the percentage of the affected dogs is simply by using the method of selective breeding. This means that the dogs that are able to reproduce are only the dogs with the favorable characters present. Another way to treat the condition is by surgery.

Hip dysplasia is a common condition that occurs mostly in large dogs. Larger dogs are at more risk of developing the condition, especially for older ones.

The term hip dysplasia means that your dog is suffering from abnormal growth of the hips. The dog usually develops it in the growing part of his life. The main reason for hip dysplasia is a weak ball and socket.

There are plenty of surgeries that treat this medical condition according to the dog’s case, but they’re very expensive.

There are also non-surgical methods of treatment, which is similar to any other arthritis. This treatment includes supplements and medications like painkillers and anti-inflammatories.

Physical therapy is also a good option. However, there’s no way to completely avoid hip dysplasia.

A Rhodesian Ridgeback can be a wonderful family companion. Its dominant personality means that you’ll be required to train it and give it time.

Once you get past that, you’ll be rewarded with one of the most loving, protective, and agile dogs in the whole neighborhood!

Scroll back to top
1shares