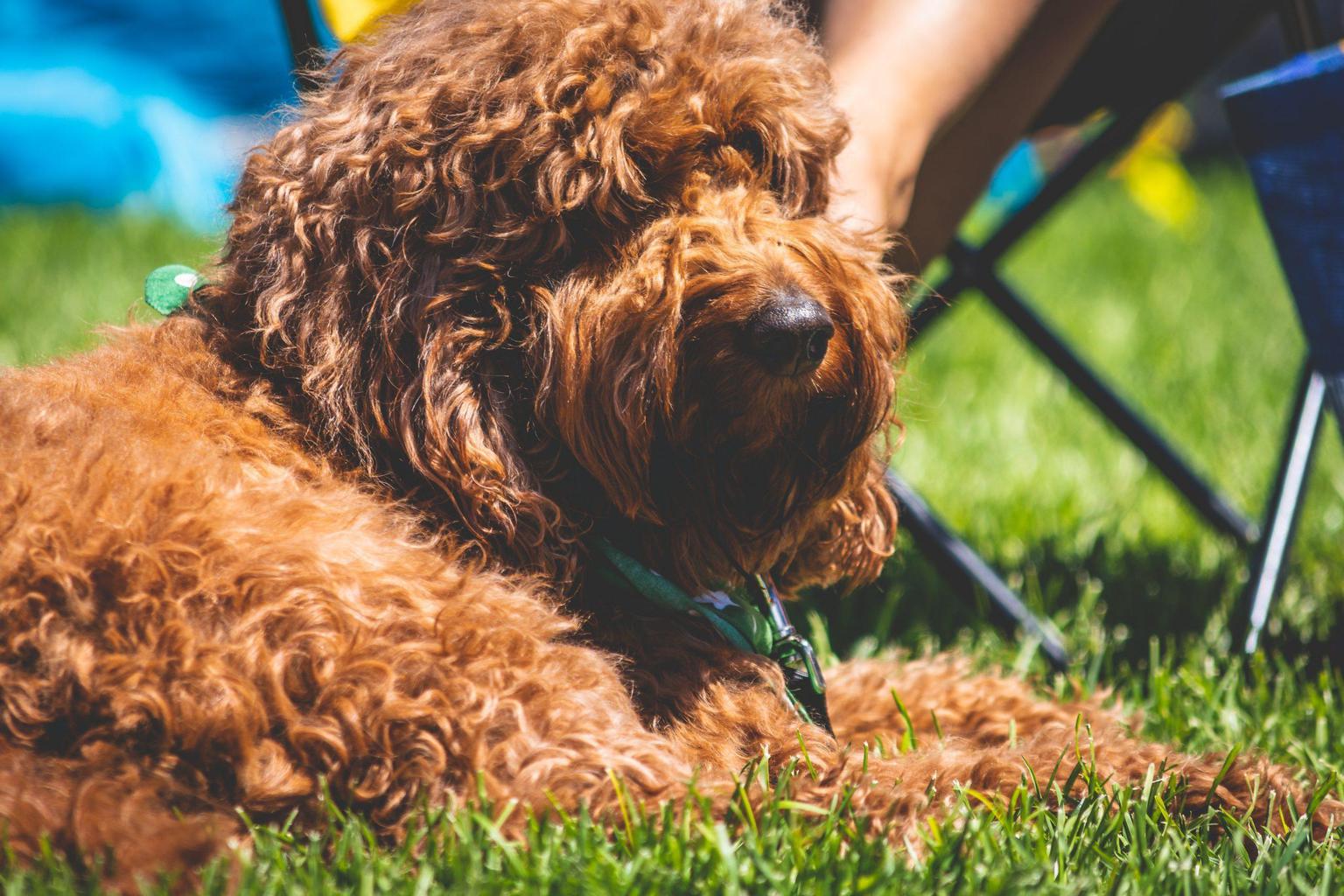 You may see a curly dog coat and think it looks fancy. In fact, curly coats do a great job of protecting dogs from cold water or thorny bushes – things they might encounter while working. Most curly-haired dog breeds were bred to assist hunters or fishermen, but some were developed for more unique purposes.

How many curly-coated dogs can you name? Here are 15 of the most popular curly-haired dog breeds.

Regardless of coat type, Portuguese Water Dogs come in black, black and white, and brown. They stand 17” to 23” tall at the shoulder and weigh 35 to 60 pounds. Their average lifespan is 11-13 years.

Aside from two coat types and three color choices, Porties also have two common haircuts. The “retriever clip” leaves the hair on the body all one length (commonly one inch) with a full face. The “lion clip” leaves longer fur around the dog’s front legs, chest, and the top of the head while shaving the dog’s back end and face.

Bred to help fishermen with various tasks, the Portie is intelligent and eager to please. That makes them relatively easy to train, as long as they get enough exercise. Without recognizing the breed name, you probably have a vague idea of what they look like because Former President Obama had two Portuguese Water Dogs while in office, Bo and Sunny.

While the Portuguese Water Dog gained fame in the White House, you may never have seen a Curly-Coated Retriever before. Their popularity ranks 162 of 195 dog breeds in the AKC.

The Curly-Coated Retriever may be one of the oldest retrieving breeds, dating to the 1800s. It’s thought to have descended from two extinct breeds: the English Water Spaniel and the Retrieving Setter. Poodle was later added to the mix for curlier fur.

Curlies are gentle and affectionate, but they are more independent than Labs and Goldens. They need a lot of exercise to prevent boredom and destructive behavior.

Airedales are the largest terrier breed. They stand about 23” tall and weigh 50 to 70 pounds. Their wiry black and tan fur is easier to brush than many other types of curly hair. However, they do need regular haircuts.

The Airedale was created by mill and factory workers to hunt rats and ducks. The “King of Terriers” has become an all-around excellent working dog, capable of nearly any job: ratter, herder, guardian, big-game hunter, duck dog, police or military dog, and more.

The Bouvier des Flandres is the largest curly-haired dog breed on our list. It stands 23.5” to 27.5” tall and weighs 70 to 110 pounds. While they are most commonly black or blue, Bouviers can be found in a wide range of colors, including brindle and fawn. Their curls are difficult to maintain and require daily brushing.

The Bouvier was developed during the medieval period around France, Belgium, and the Netherlands to be an all-purpose farm dog. They would herd cattle, pull carts, and guard the property and livestock.

While less common in the United States, the Bouvier is often used in Europe as police dogs and guide dogs for the blind.

The Irish Water Spaniel stands 21”-24” tall and weighs 45-68 pounds. Their curls are always liver-colored, and the dog has a smooth face and a sleek “rat” tail.

The breed was developed in Ireland in the 1830s to retrieve waterfowl from the cold North Sea. The Irish Water Spaniel’s tight curls helped to keep them warm in the water.

The Irish Water Spaniel was one of the first 9 breeds to be registered with the AKC in 1878, and there were 4 Irish Water Spaniels at the very first Westminster Kennel Club show in 1877. This breed is described as being brave, hardworking, affectionate, and playful.

The Kerry Blue Terrier stands 17.5” to 19.5” and weighs 30 to 40 pounds. Their curls need regular brushing and trimming to maintain the dog’s appearance and comfort. Kerries have tons of energy and need plenty of exercise.

The Kerry was developed in its namesake Irish county to hunt birds and small game and retrieve on land or water. They’re born black; then, their color fades to its famous blue color by the time the dog is about 18 months old.

The Spanish Water Dog’s signature wooly curls come in solid black, solid brown, and many variations of white with brown, black, or beige. The breed stands 15.75” to 19.75” and weighs 30 to 50 pounds.

The Spanish Water Dog is an old breed with a murky past. Nobody is quite sure how the dog arrived or was developed on the Iberian Peninsula, but the breed has always been dual-purpose and used for sheepherding and retrieving waterfowl. While the breed has been in Europe for centuries, it didn’t join the American Kennel Club (AKC) until 2014.

According to the AKC, the Spanish Water Dog’s hair should be all one length and should “never be brushed.” Left to grow, the wooly curls will form cords (if you know how to help them form properly) or painful mats (if you don’t give the coat any attention). Most pet owners choose to keep their Spanish Water Dog’s coat clipped short for the dog’s comfort.

The Barbet stands 19” to 24” tall and weighs 35 to 65 pounds. Its thick curls require daily brushing and regular trimming to prevent mats from forming. Barbets come in many colors, including white, fawn, brown, black, and grey.

There are depictions of the Barbet dating back to the 16th century, and this old breed contributed to the development of the Poodle, Bichon Frise, Newfoundland, and many other breeds.

Barbets are intelligent and easy to train. They make calm family pets as long as they get enough exercise.

The American Water Spaniel stands 15” to 18” tall and weighs 25 to 45 pounds. Its coat can be wavy or curly and is relatively short and easy to care for.

Bred to be multipurpose hunting dogs in Minnesota and Wisconsin, the American Water Spaniel can retrieve downed game from a boat, flush game birds, and hunt rabbits. Since they were bred to spend all day alongside a hunter, they are prone to separation anxiety and obesity if left home alone for long periods.

The Lagotto Romagnolo comes in at 16” to 19” tall and weighs 24 to 35 pounds. Their dense wooly curls come in brown, orange, off-white, and combinations of white with brown or orange. The Lagotto Romagnolo needs daily brushing to prevent painful mats from forming in their curls.

This breed is the only one in the world specialized to sniff out truffles, a type of fungus that grows underground and is considered a delicacy. Before becoming truffle hunters, this ancient breed was the original “water dog” breed that from which all others descend. 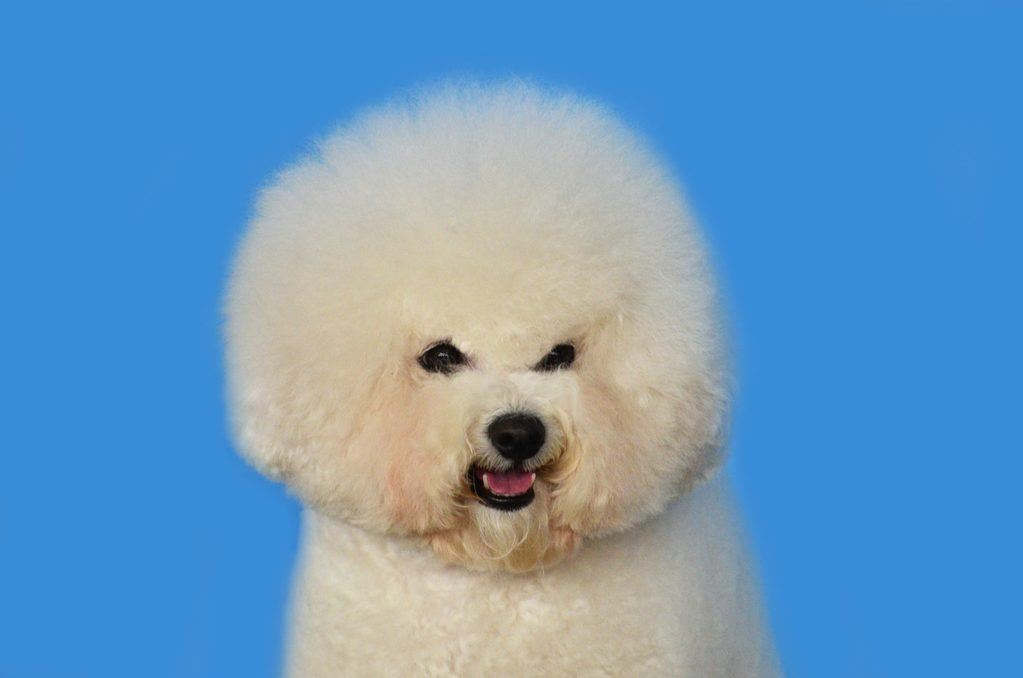 The Bichon Frise stands 9.5” to 11.5” tall and weighs 12 to 18 pounds. Their white curls don’t shed and need regular brushing. Many pet owners choose to keep their Bichon in a short clip to reduce brushing time. Bichons are playful and intelligent.

The Bichon originated on Tenerife, an island owned by Spain, then was developed in the Mediterranean area. Bichons spent several centuries as pampered pooches in palaces across Europe until the French Revolution in 1789. When their royal owners were put to death, Bichons found themselves on the streets, where they were taken in by performers who taught them to do tricks.

The Bolognese stands 10” to 12” tall and weighs 5.5 to 9 pounds. This breed is closely related to the Bichon, but its white curls are much looser than the Bichon’s. While the coat is traditionally left untrimmed, many pet owners opt for a more manageable short clip on their Bolognese.

Developed in Bologna, Italy, the Bolognese was popular among European royalty as far back as the 11th or 12th centuries. These calm dogs love nothing more than being with their people, and they are prone to separation anxiety if left alone for too long.

The Bedlington Terrier measures in at 15” to 17.5” tall and weighs 17 to 23 pounds. While Bedlingtons are most commonly blue, they can also be sandy or liver and may have tan markings. Their curls need regular brushing and trimming.

The Bedlington may look like a lamb, but it was bred to hunt rats and snakes and was used in dogfighting, too. The first dog to be called a “Bedlington Terrier” was born in 1825 and continued hunting until he was 14, blind, and toothless.

While not a very popular breed in the United States these days, the Bedlington Terrier was the 25th dog breed admitted into the American Kennel Club.

The Pumi stands 15” to 18.5” tall and weighs 22 to 29 pounds. The Pumi (plural Pumik) coat comes in many solid colors from white to grey to black. The curls are made of a combination of soft and harsh hair and need regular combing and trimming.

The Pumi originated in Hungary and is closely related to the Puli, one of the dog breeds known for having corded hair. Despite their small size, Pumik were bred to be sheepdogs. With semi-erect ears and a curly tail, they have a “whimsical” look, but they need plenty of exercise to burn off all their energy. 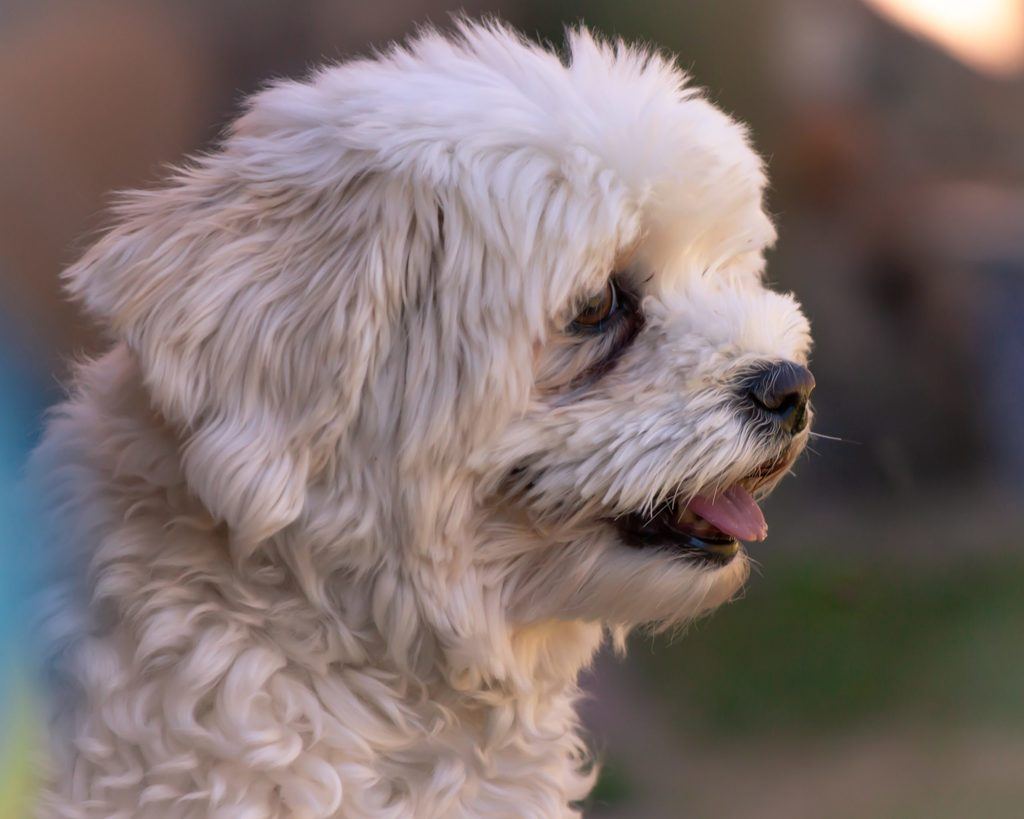 The Havanese stands 8.5” to 11.5” tall and weighs 7 to 13 pounds. Their fur can be straight, wavy, or curly and comes in a wide variety of colors, including white, black, chocolate, gold, and red. While all the coat types are prone to matting, the curly coat type, in particular, needs daily brushing to prevent painful mats from forming.

The Havanese shares a common ancestor with the Bichon and was developed in Havana, Cuba. When Cubans fleeing communism arrived in the United States, the Havanese became explosively popular here, too. It’s one of the most popular curly-haired dog breeds on our list, coming in 24th out of 195 dog breeds registered in the AKC. 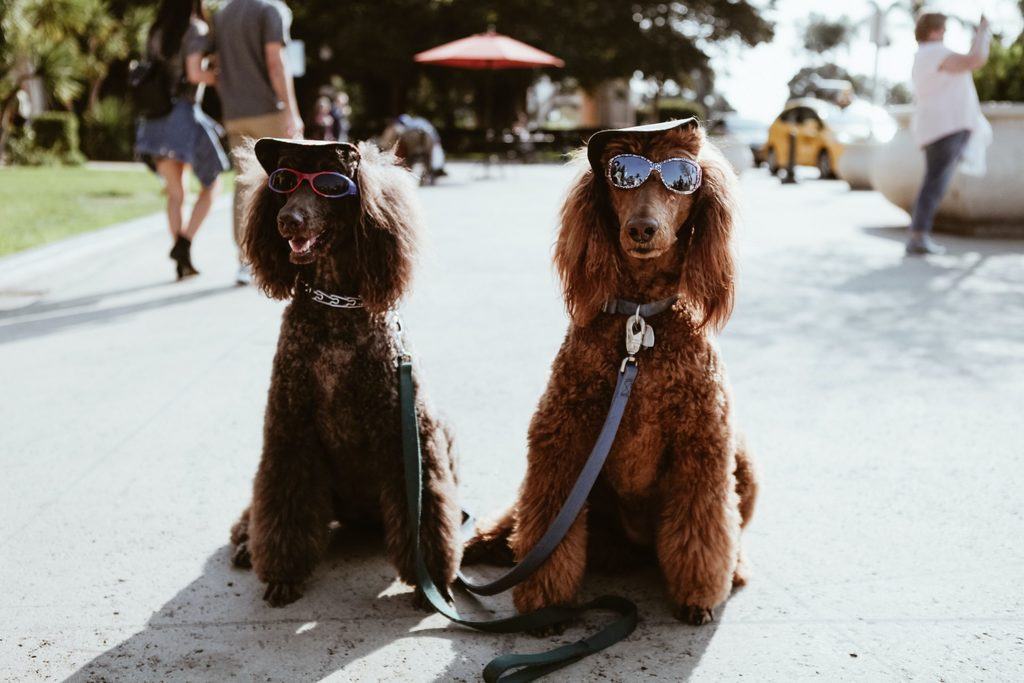 Of course, we couldn’t forget about Poodles and Poodle mixes! Poodles are unique, though, because they come in 3 sizes:

The Standard Poodle was developed more than 400 years ago to retrieve ducks from the water after a hunter had shot them. That funny haircut show Poodles get? It’s based on the practical historical cut Poodles got, where the hair was kept longer around the chest and joints to keep them warm in the water, while unnecessary hair was shaved off to reduce drag.

The Miniature and Toy Poodles were bred down from the Standard Poodle in later years for sniffing out truffles and being companions, respectively.

Regardless of which size of Poodle or Poodle mix you get, you need to plan on either frequent brushing or a very short haircut. Their curly coats get matted very easily, and those mats can be painful for your dog.

Our Curated List of The Best Deals for Dog Lovers!