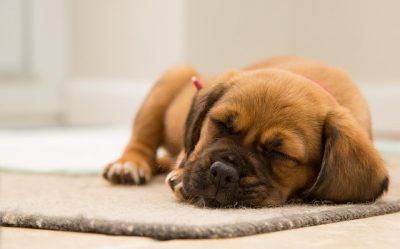 A dog’s sleeping pattern is quite different from a human’s, and the amount a dog sleeps is dependent upon size and breed. Generally, smaller breeds of dog require less sleep than bigger breeds.

On average, it has been determined that dogs sleep anywhere between 12 and 18 hours a day, but many factors come into play that affect the sleeping pattern.

An inactive dog, one that spends most of its time at home, in the yard, or indoors, tends to sleep more often than a dog that spends its time outdoors at the park or on long walks with the owner.

Stages of a Dog’s Sleep

Because dogs don’t have a regular sleep pattern like humans, they tend to need more rest to achieve the R.E.M stage of sleep.

The first stage of sleep is called Slow Wave Sleep (SWS). It occurs when the brain has less activity and mental functions are slow, but the body is still alert.

The second stage of sleep is called Rapid Eye Movement, more commonly known as R.E.M. This is a deeper sleep when the brain has significantly higher brain activity, noticeable eye movements, body twitches, and noises.

As an example, humans tend to spend anywhere between 20 and 25 percent of their sleep time in the R.E.M stage, whereas dogs only spend between 8 and 12 percent in the R.E.M sleep mode.

Since humans dream during the R.E.M. stage of sleep, many may wonder if dogs dream as well.

You may notice while your dog sleeps that it often makes noises and movements, sometimes a little growl or even seeming to kick or appear to be running. It’s been a topic of debate for a long while now, but one of the most widely accepted theories is that dreams are a way for the brain to process the data of the day’s events. Researchers have studied the brain waves of sleeping dogs and compared them to known data of the human sleep pattern and have discovered very similar results, leading to the strong belief that yes, dogs do dream. 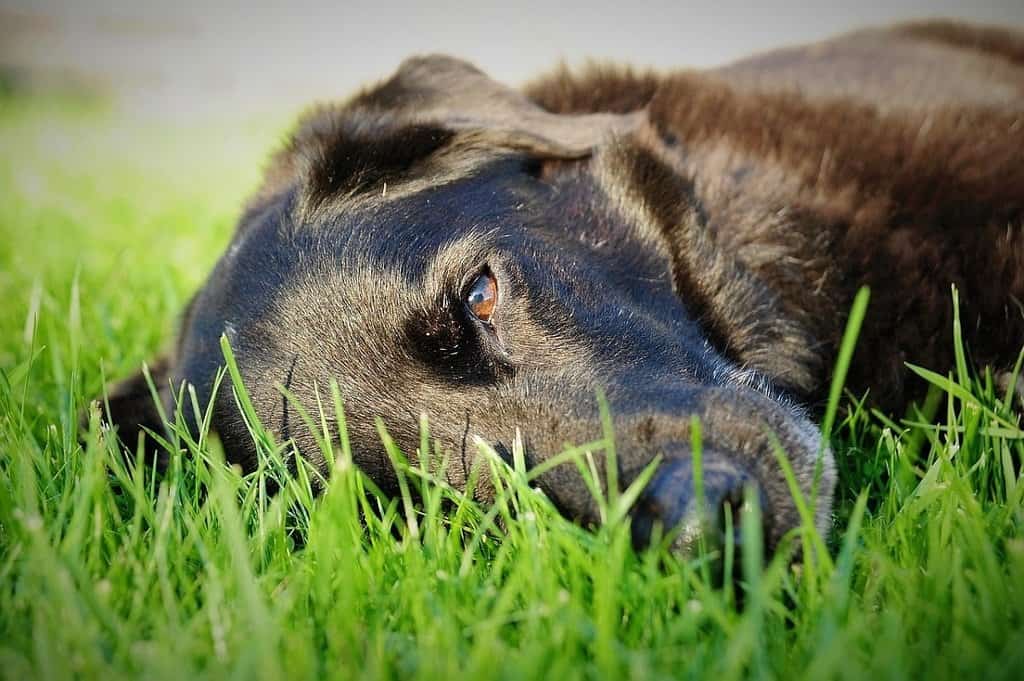 Factors That Determine How Long a Dog Sleeps

Determining how much sleep your dog needs during the day is dependent upon several factors:

The age of the dog. Puppies, for instance, sleep up to 18 hours a day. Older dogs also tend to sleep more — as the body starts to age and slow down, it requires more sleep time.

The activity level of the dog. The more active the dog, the less sleep it will require. Inactive dogs get bored more quickly, so they tend to nap more often.

The dog’s diet. There are a lot of poor-quality dog foods on the market that contain a lot of filler and lack the sufficient vitamins and minerals required for healthy canines. A lack of proper nutrition and energy levels provided by quality products can leave a dog feeling tired and will affect its sleep patterns. It’s advisable to get proper advice on feeding your dog.

As stated above, the size and breed of the dog play a part in the sleep required; larger dogs require more sleep than smaller breeds.

Why Does My Dog Sleep That Way?

Like their human counterparts, most dogs also have their favorite sleeping positions, the most common positions being:

Sleeping on their side. Sleeping on its side or stomach with the paws stretched out is the most common position for a relaxed dog, usually for short naps.

Sleeping on their backs. Facebook and YouTube are full of hilarious pictures and videos of this position: the dog stretched out on its back, paws in the air. One of the reasons for this could be to expose the belly to the elements. Since the belly has little to no fur, this could help with cooling off on a hot day. Another possible reason is that this helps the muscles relax, leading to greater comfort.

Sleeping curled up like a ball. Although this is not a very relaxed way to sleep, as the dog needs to use muscles to maintain this position, it is still very common. The dog in this position is alert and ready to respond.

Sleeping back to back. If your dog touches you or another dog while asleep it indicates affection and attachment. Pack dogs usually sleep next to each other, and this is the dog’s primitive way of showing this attachment.

The environment where the dog sleeps also affects the amount of rest it gets. Dogs generally will sleep anywhere, but just like humans, they also want a comfy place to sleep on a regular basis. Some dogs prefer to sleep under tables or beds, while other dogs like to use blankets or cushions for a relaxed sleep. Providing your dog with a comfortable spot to sleep will go a long way to ensuring a restful, relaxed night’s sleep.

When Should I Be Concerned About My Dog’s Sleep Habits?

It is best to monitor your dog’s sleeping habits, as they may be an indication of health issues or other factors at play.

If the dog appears to be sluggish and has signs of physical discomfort, it may be a parasite or flea infestation, arthritis, hip dysplasia, allergies, or a urinary tract infection.

Old age, as with humans, can cause painful conditions such as arthritis to develop.

If your dog is on medication after an illness, it could be a reaction to or side effects of the drugs.

The dog may be suffering from stress, anxiety, or depression, which could be caused by a favorite family member being away for an extended period of time or a move to a different house in a different area, causing disruptions to your dog.

In general, if you feel that your dog is not getting enough sleep or that there may be some medical reasons for the dog’s lack of or too much sleep, it’s always best to take it to the veterinarian for a check-up. It may just be a case of refining the dog’s diet or taking the dog for a run around the block on the weekends.