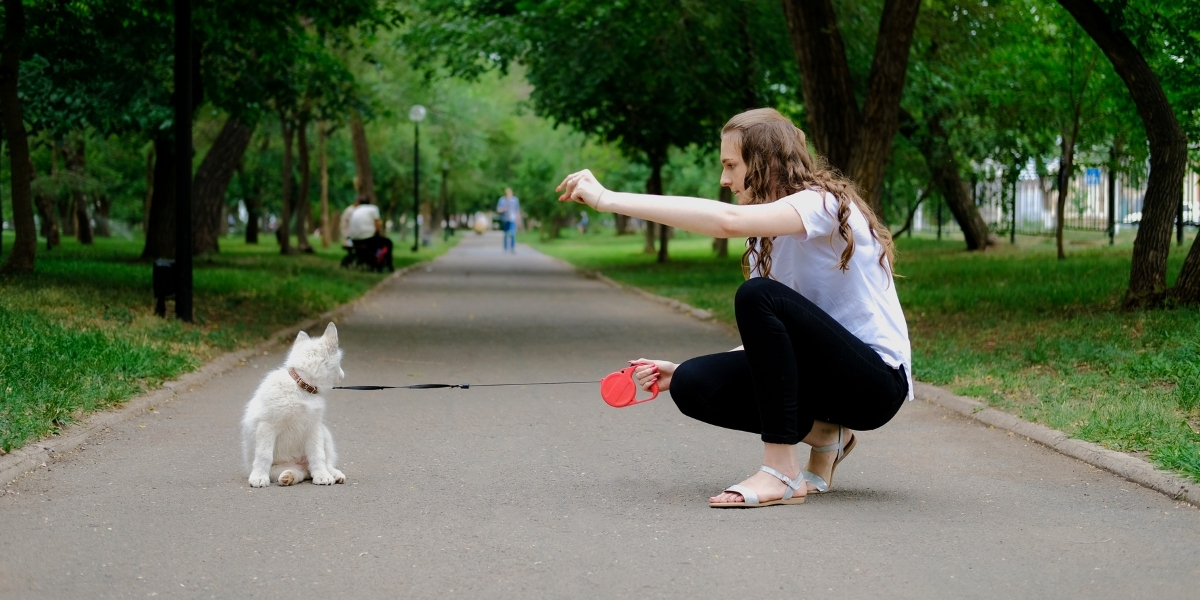 If you have a large breed dog, chances are you’ve researched several options when it comes to picking out the right leash.

While they’re a popular item on the market today, a retractable dog leash can pose more harm than good for you and your pooch.

By enabling too much distance to accumulate between you and your animal, they open the door to myriad threats and vulnerabilities.

Today, we’re breaking down a few of the top reasons why these types of leashes should be avoided.

Ready to get started? Let’s dive in!

Before we delve too deeply into why a retractable dog leash isn’t the best option for your furry friend, let’s establish exactly what they are.

This leash is essentially a thin cord. It’s wrapped around a device that’s spring-loaded into a handle.

When the user presses a button on the handle, he or she can control how much of the leash is stretched out, and how much of it contracts.

At the onset, a retractable dog leash appears to be beneficial, as it seems to allow the dog greater freedom to explore. In fact, some leashes of this type are up to 26 feet long!

Compared to the six feet that traditional flat leashes average, that’s plenty of space for dogs to play around, run, and check out the territory.

Unfortunately, it’s also plenty of space for them to get hurt — or to hurt others.

Let’s take a look at why such exposure can often pose unintentional risks:

It only takes a split second for an accident to happen. When owners fail to use the button on the handle, the length of a retractable dog leash is dependent upon how far out the dog goes.

Even when the button is engaged, it’s often locked at a position that allows much more slack and space than a traditional leash offers.

As such, dogs are freer to run into the road or behind a car in the parking lot. They’re also unrestrained enough to approach another animal or another person.

Often, there’s another challenge present in these circumstances: the handle.

When the cord is pulled hard enough, you could accidentally drop the handle, giving your dog a head start into an often uncharted territory.

When these types of incidents occur, owners can try to contract the leash quickly. Yet, this effort can prove time-consuming and cumbersome.

If the handle hits the ground, it’s often enough to startle dogs. This adds to any potential anxiety triggered by wandering too far outside the owner’s watchful eye.

2. The Cord is Thin and Vulnerable

Large breed dogs are often barrels of strength. They’re oversized and muscular, with energy for days.

As such, the thin cord that comprises the retractable dog leash is no match against this force. They frequently break and snap, especially when a dog begins to run or chase at top speed.

When this happens, it not only puts the dog and its surroundings in danger. It also creates a hazard for the owner.

The cord from a retractable dog leash has been known to snap back into owners’ faces, hitting their eyes, teeth, and/or face. It’s often traveling at a speed that’s fast enough to do major damage.

In fact, a young girl was partially blinded recently when her retractable dog leash snapped back into her face.

Over time, the cord could refuse to extend or stay in position. It could also refuse to contract, leaving you with a long mess of cord to untangle and store.

As such, it’s wisest to invest in a flat leash that can stand the test of time, and is designed to be durable and strong, even under the toughest circumstances.

Extended, the cord from a retractable dog leash is so thin it’s often difficult to see.

As such, it can cause a trip hazard. Its length can also be difficult to maneuver around.

Often, owners find themselves entangled under one of two circumstances: they’ve extended the leash out to its full capacity, or are trying to shorten it by grabbing at it frantically.

In both cases, there is an oversupply of slack in the leash, allowing it to more easily be wrapped around nearby objects.

Moreover, dogs can also get entangled in the leash itself, upping the risk for potential injury.

4. They Can Injure Dogs

As dogs seek to get to the end of the leash’s capacity, they often pull very strongly to ensure there’s none left.

Over time, this can create a strain on the dog’s neck, trachea (or windpipe), and spine.

The pulling can also instigate a herniation of the cervical intervertebral disc. This condition is typically incredibly painful.

A traditional leash is safer for both owners and their pets to maneuver.

With a set length to work with, there’s less risk that the dog will suddenly pull forward to gain additional ground. As such, the chance of injury or strain is significantly reduced.

5. They Prevent or Reverse Proper Walking

In a proper dog/owner walking relationship, the owner leads the dog. He or she commands the dog what to do and where to go.

Yet, using a retractable dog leash sends the opposite message to your dog.

In a nutshell, these leashes teach dogs that by simply running fast and pulling on the cord, it will extend.

Focusing your dog’s energy on keeping pace with you is a much stronger alternative.

This way, you’re still in command as the owner, and your dog is your obedient helper, no matter how big he’s gotten.

Our Curated List of The Best Deals for Dog Lovers!