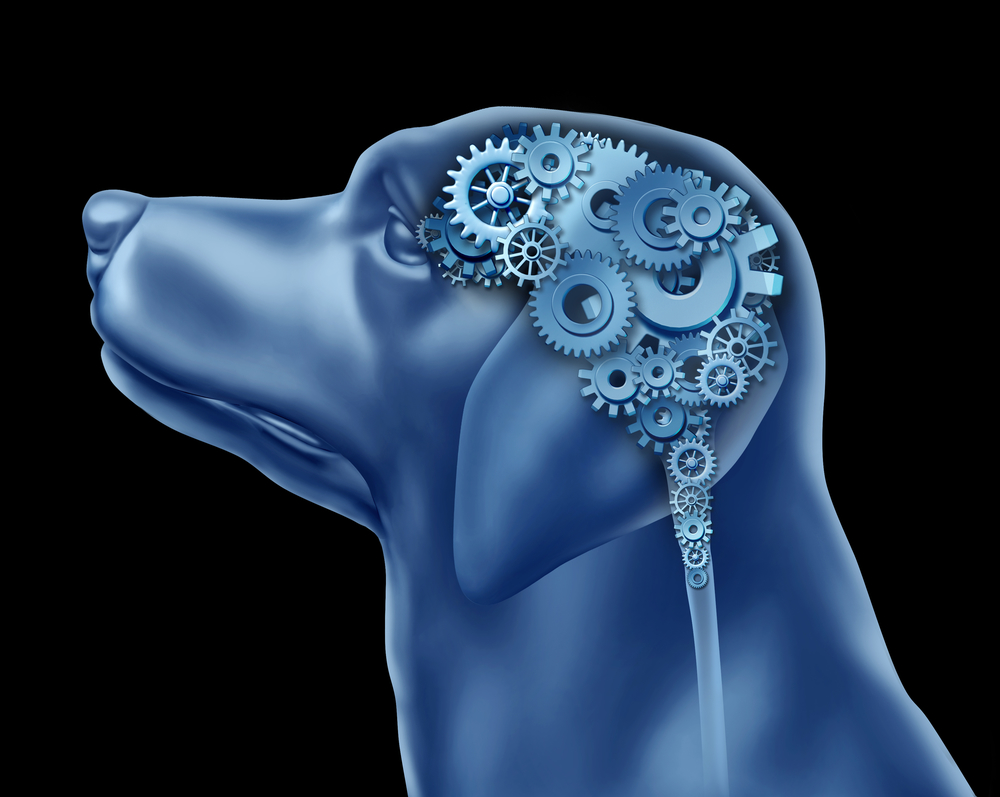 With over 7,000 dogs included in this study, the researchers did, in fact, find that larger dogs performed better on some tasks. Given that larger dogs generally have larger brains, this seems to support the idea that bigger dogs are smarter.

I’m a skeptic at heart, and I’m going to be fairly tough on this study. That doesn’t mean that they’re wrong – it just means we need more research in this area.

Does Brain Size Actually Correlate With How Smart a Dog Is?

In order to answer the question of whether big dogs are smarter than little dogs, we’re going to have to go into the weeds a little bit with both this specific paper and the study of comparative cognition. I am by no means an expert, but this is an area of fascination for me – my favorite class in college was either Comparative Neuroethology or Cognition. So bear with me as we try to answer this question.

That’s because it’s not just the size of the brain that matters – it’s what areas of the brain are enlarged. Dogs offer us an interesting opportunity to look at brain size versus intelligence, though, because we’re comparing brain size within the same species. In theory, at least, that means the brain is proportionally equivalent across breeds.

I’d argue that that assumption is ill-founded. When we breed dogs for a purpose, part of what we’re breeding for is behavior. A greyhound must not just have long legs and a deep chest; he’s got to have a strong desire to chase a fast-retreating hare or lure.

A border collie is of no use to a shepherd if he doesn’t have the intelligence to steadily understand cues and manipulate sheep. A Malinois has a strong desire to bark and bite. And what good is a retreiver with no interest in carrying things in his mouth?

The point is, breeds have specific behaviors that they’re supposed to exhibit. Behaviors, at least in part, are controlled by genes. And that likely means that certain areas of the brain differ across breeds. There hasn’t been any research done on this (that I know of), but I’d be shocked if the brain of a border collie and the brain of an Afghan hound are actually totally identical in everything except size.

Perhaps it would be wiser to look at true mutts of different sizes (since that would reduce the likelihood of breed-specific behavioral and cognitive differences) or to look at differences within a given breed.

I point this out to challenge the underlying premise that this study has: that dog brain comparisons actually look exclusively at the size of the brain.

Finally, this Dognition study didn’t actually measure the weight of these individual dog’s brains (because that would require dissecting the dogs, which I’m sure the owners wouldn’t want). They estimated the dog’s brain weight based on average weights for the breed (which meant that only purebred dogs were accepted into the study). 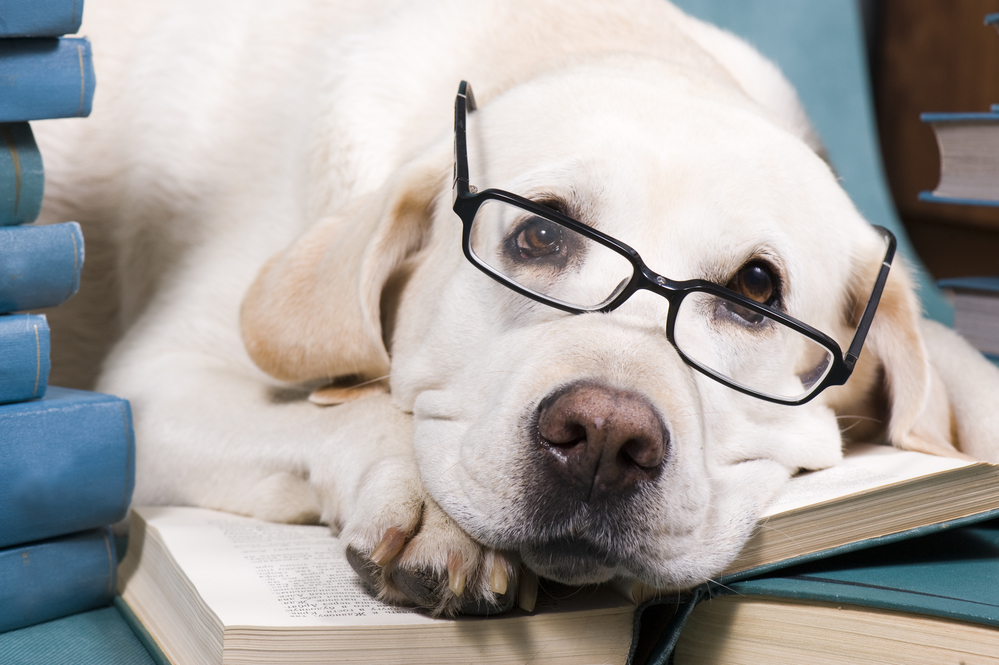 How Do We Test Dog Intelligence, Anyway?

For example, it’s somewhat narrow-minded to show a dolphin or a dog a mirror and assume that they are stupid because they don’t recognize themselves. Dolphins primarily “see” using echolocation, and dogs are very scent-focused animals.

In contrast, a study that takes a dog’s own urine and puts it somewhere unexpected often finds that dogs easily recognize themselves – they spend much longer investigating their own scent if they encounter it somewhere that they’ve never been before. Humans would miserably fail this test if dogs tried to test our smarts.

Whenever an animal “fails” a cognition test, we need to ask ourselves:

I bring all of this up because the tests used in this Dognition study aren’t well-accepted intelligence tests. One test examined whether a dog would yawn after his owner yawned. How is that intelligence?

Another test had the owner instruct the dog to leave a treat alone. The test then measured how long the dog waited before eating the treat if he was being watched versus if the owner’s back was turned. The researchers claimed that this is a test of self-control.

But is self-control equivalent to intelligence? And if a dog is smart enough to tell the difference between being watched and not, is he smarter? Finally, did they account for the fact that a well-trained dog should “leave it” when asked, even if not supervised? My own border collie sure would! And that’s a measure of our training more than anything else.

Yet another test examined how long a dog would hold eye contact with his owner when the owner held a treat up to the owner’s eye. Yet again, I really don’t understand how this measures intelligence. This seems like it could measure confidence or the relationship between the owner and the dog (or the dog and the treat) – but not smarts.

Another test had some legs, though. In this test, the owners hid a treat under a cup. They placed the “bait cup” next to another, empty cup. Then they had the dog wait for a varying amount of time before releasing the dog to eat – and they saw if the dog went to the correct cup. This is a classic test of delayed memory.

That said, is memory equivalent to intelligence? If so, humans are sorely outmatched by a Clark’s Nutcracker. This drab, grey bird can find roughly 10,000 seeds after hiding them months before.

In another study, Stanley Coren’s The Intelligence of Dogs, the dogs were tested based on how quickly they learned a new command. This is a great test of trainability and is probably what most people think of when they mean that a dog is smart.

For most people, a trainable dog is a smart dog. The Dognition study didn’t really measure trainability. They did attempt to control for training so that a dog who’s been trained to do a task or a component of a task previously isn’t unfairly graded.

To me, there’s one more flaw with this Dognition study: it’s an online survey, based on the reporting of untrained owners and their dogs in uncontrolled environments. While this allowed the researchers to gather large amounts of information quite easily (and cheaply), it’s not exactly the most rigorous way to conduct science. It’s almost always wise to be skeptical of survey-based research.

What Were The Results? Are Big Dogs Smarter Than Small Dogs?

If we look at the Dognition study, larger dogs did perform better in some areas. The researchers conducted a lot of statistical tests, and the results stayed the same. Here’s what they found:

Essentially, there’s pretty weak evidence in this study that bigger-brained dogs are “smarter,” despite the claims being made in some popular media about the study. The researchers did also look at several other alternative explanations, like breed group, head shape, and training history. They still found the effects above.

In Stanley Coren’s The Intelligence of Dogs, Dr. Coren was not aiming to compare brain size to intelligence. As mentioned above, he examined how long it took for a dog to learn a new task and how accurately the dog responded after learning.

All of the top five dog breeds in Dr. Coren’s study are medium to large (border collie, poodle, German shepherd, golden retreiver, and doberman). #6 is a shetland sheepdog and #8 is a papillon, but otherwise, all 10 of Dr. Coren’s smartest dog breeds are large.

If you scroll down Dr. Coren’s list of breeds to the opposite end of the spectrum, though, you don’t necessarily see the sizes reversed. Dr. Coren’s 10 dumbest dog breeds are basset hounds, mastiffs, beagles, pekingese, bloodhounds, borzoi, chow chow, bulldog, basenji, and Afghan hound.

Mastiffs, borzois, chow chows, and Afghan hounds are all pretty big dogs – far larger than a papillon. Clearly, brain size isn’t the only story here, either. 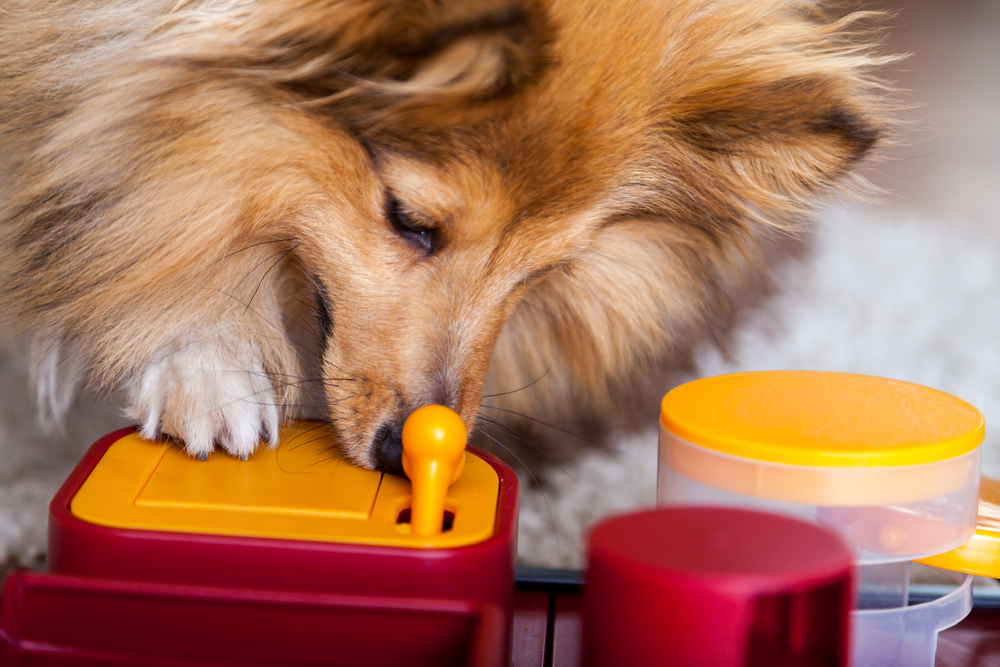 It’s a common (and unfortunate) myth that small dogs are stupid, untrainable, or inherently “mean”.  Small dogs are also easier to ignore when they’re poorly behaved. In my personal experience working with thousands of shelter dogs, small dogs aren’t necessarily dumber than big dogs. But the owners of small dogs are often far less likely to train their dogs.

Even if the training that a dog received didn’t directly affect the tasks at hand in a cognition test, regular training could help a dog pass a test. When I train a dog, I teach that dog to think and problem-solve.

He’s exercising his brain and working through problems to earn rewards. Therefore, a well-trained dog is at an advantage in a cognition test even if the test is completely unrelated to that dog’s training.

In other words, the stereotype that small dogs are dumb or untrainable can lead to them not being trained. When a small dog doesn’t get trained, the small dog misses out on learning how to learn. That small dog then is less likely to succeed in a cognitive task. We’ve now just confirmed our suspicions – we were right! The small dog was dumb all along!

Except we haven’t. We set the small dog up to fail by not training him, then we used his lack of training as further proof that he’s not smart enough to be trained.

In conclusion, there is some evidence to suggest that big dogs are smarter than little dogs. Between the Dognition study and The Intelligence of Dogs, there’s at least some evidence for the claim. But based on the papillon’s handy outmaneuvering of the mastiff, it’s clear that brain size alone is not the full story!

You May Also Enjoy…

Dog IQ: How to Test Intelligence in Dogs

10 Best Calming Treats for Dogs in 2020: Top Chews and Bites for Your Anxious Pet

6 Ways to Stop a Dog From Barking When Left Alone

How Long Can Dogs Hold Their Pee?

5 Tips for Crate Training a Puppy While at Work